When Tropical Storm Isaias hit Maryland a few weeks ago, many of ACLT’s trails were damaged by the increased water flow and downed trees. Most notably, the raft that crosses Parker’s Creek along the North-South trail was washed downstream and caught deep in the marshlands. Luckily, it was later spotted during a canoe trip by former CCC intern Rachel Delbo. This week, a team of five people (Autumn Phillips-Lewis, Dale Hutchins, Kevin Donahue, Alyssa Mantanin, and I) worked diligently to rescue the raft from the marsh.

The recovery team met on August 25th at 8 am, timing the rescue mission to coincide with high tide to allow for easier removal. We loaded up the necessary gear and drove to the end of Double Oak Road Trail where the team hopped in canoes and paddled down the creek before wading to the raft site. Other than some damage to the handrails and a scratch in the foam on the bottom, the raft was completely intact. However, it had been flipped upside down by the storm, so the first step in our recovery process was to turn it back over. This seemed like a daunting task, but it was no match for the strength of our team!

Next, we had to retrieve the cables that had previously secured the raft to trees on opposite banks of the creek. These cables were still attached at one end to the raft and the rest had been pushed deep into the marsh where they had wrapped around trees and grasses. After some detangling by Alyssa and me, these were safely removed and returned to the raft.

Finally, it was time to begin the most difficult part: moving the raft back to the water. While it was high tide, there was still about 50 feet of mud, tall grasses, trees, and stumps between it and the water’s edge. To make the moving process easier, the life jacket bin and several of the long boards on the sides were removed to reduce weight. Even with the five of us working together, the raft was still way too heavy to carry. So we had to come up with a new solution.

Dale, Kevin, and Autumn set up a system to pull the raft closer to the shore using a come-a-long and chains attached to nearby trees. Dale operated the come-a-long while the rest of us pushed and placed boards in front of the raft, so it could slide more easily over the muddy ground. Careful maneuvering was necessary to safely remove the raft while avoiding large obstacles like trees and stumps. This was achieved by strategic pushing and moving the come-a-long to different trees to ensure the raft was angled properly to make it through the difficult terrain. At one point, the raft had to be held sideways over the mud and some water, so it could make it past a tall stump and a protruding log. After successfully navigating these obstructions, and with a few pushes over the final grassy mound, the raft was finally free! The canoes were used to haul the raft upstream back to its proper location where the damage was repaired, the cables were replaced, and it is now once again available for public use.

Overall, the raft removal and restoration process took almost a full day of mud wading, physical strength, and careful planning, but our hard work paid off! The raft is now back where it belongs, and this adventure will be remembered at ACLT for many years to come.

On August 5, 2020, the County issued a press release noting that “On the afternoon of Tuesday, Aug. 4, 2020, due to the excessive rainfall brought about by Tropical Storm Isaias, erosion beneath the Main Street roadway in Prince Frederick damaged a sewer line and caused a sewage force main to rupture. As a result, sewage was discharged 200 yards north of the headwaters of Parkers Creek.”

It noted that “A substantial quantity of effluent was controlled through shutting down pump stations and removal with pump trucks.” In a conversation with a senior county official, we learned that 10s of thousands of gallons were discharged into the creek before the pumping station was shut down. We are grateful that county staff moved quickly to shut it down.

To some extent, this re-opens a concern that ACLT has had about the Prince Frederick sewage treatment facility off of Tobacco Ridge Road, south of Dares Beach Road, which is the site of the original Prince Frederick Wastewater Treatment Plant. It was built in 1973 and was a small plant that discharged treated effluent directly into Parkers Creek.

However, the County Water and Sewer Plan was revised to prohibit future water systems from having direct discharge into waterways. In other words, new systems had to use land application. By doing so, Calvert County was leading the way in the state in addressing the impact of sewage treatment plants on the Chesapeake Bay.

A new Prince Frederick treatment plant opened in 1991 off of Barstow Rd, a much larger plant with a rated capacity of 450,000 gallons, and the Tobacco Ridge Road plant was decommissioned. The treated effluent from the Barstow Plant is applied to approximately 100 acres of forests and fields, according to the 2014 Water and Sewer Plan.

Since then, the Prince Frederick town center has continued to grow, creating a need for more sewage capacity. In 2002, the County submitted plans to the public for a new 300,000 gallon land application treatment facility at the site of the original Plant on Tobacco Ridge Road. ACLT raised its opposition for the facility, noting that Parkers Creek is a “pristine” watershed, and expressing concerns that the system would fail and pollute the Creek. The County approved the plan despite ACLT’s concerns, but it promised to give ACLT the results of its monitoring of the Creek and the groundwater surrounding the Plant, which it has done. Meanwhile, ACLT continued its own stream monitoring, measuring nitrogen and phosphorus levels in the water below the Plant. Thus far, we have not detected a significant increase in either nitrogen or phosphorus since the Plant was completed.

The facility has an 18 million-gallon storage/holding pond and an additional 3.8-million-gallon emergency storage space. To date, the storage facilities have handled the facility usage and the storms.

The August 4th event was not a failure of the Plant. It was due to storm damage of the pump station that pumps sewage to the Plant, allegedly caused by the partial collapse of the road during heavy rains from Tropical Storm Isaias.

What are the lessons to be learned from Tropical Storm Isaias?

First, meteorologists have been saying for some time that we should expect storms to become more severe and to produce more rainfall. As a result, infrastructure like pumping stations and stormwater management devices which were designed for lesser storms need to be better fortified. Related to that is the need to re-evaluate the Plant itself to see if it will be able to handle future storms and the substantial growth of the Prince Frederick Town Center currently proposed. Isaias was only a tropical storm. However, it moved so slowly that it wound up dumping approximately 10 inches of rain in just 14 hours. Houston Texas has been devasted twice in the last few years from slow moving storms. Hurricane Harvey dumped an unheard of 51” of rain in the Houston area. What would happen to Prince Frederick’s 18-million-gallon storage/holding pond if a hurricane dumped 20” of rain on Prince Frederick as did a storm a few years ago in lower Charles County? The resulting sewage and sediment from the dams could permanently alter our watershed.

Finally, land application of sewage is still an experimental system that has been used in but a few places in Maryland and the U.S. We are concerned that the ground may eventually be saturated by the accumulation of phosphorus in the soil and that could cause damage not yet understood. If that turns out to be the case, Calvert needs a “Plan B”.

Resilience is a term that is becoming more prevalent as we all are beginning to see more signs of climate change. An ounce of prevention is worth a pound of cure. We will be urging the County to use resilience planning and design to ensure that sewage systems and stormwater management are adequately addressed during the Prince Frederick Master Plan update, which is currently underway.

This notice was sent via email to all accounts for which ACLT has an email address and via US postal service to all other accounts.
The information below relates to a data security incident involving Blackbaud, Inc., a service provider used by the American Chestnut Land Trust (ACLT). We take our data protection responsibilities very seriously and want to keep you informed, although at this time, we believe there is no threat to disclosure of your personal information.
In late July, we were contacted by Blackbaud, one of the world’s largest providers of donor relationship management systems for non-profit organizations. We were informed that one of Blackbaud’s service providers had been the victim of a ransomware attack that culminated in May 2020. Immediately following the discovery of the attack, a detailed forensic investigation was undertaken, on behalf of Blackbaud, by law enforcement and third-party cyber security experts.
ACLT data accessed by the cybercriminal in the Blackbaud database did not contain any credit card information. Further, the cybercriminal did not gain access to bank account information because it is encrypted. ACLT does not store usernames, passwords, or social security numbers, so none of this type of data was accessed. We do retain donor information that enables us to communicate effectively with you. None of our data was lost or corrupted as a result of this incident.
Blackbaud assured us that in order to protect donor data and mitigate potential identity theft, it met the cybercriminal’s ransomware demand. Blackbaud has advised us that the data was destroyed, based on findings from cybercriminal and third-party experts. Blackbaud continues to monitor online activity in an effort to verify the data accessed by the cybercriminal has not been misused.
You can learn more about the breach from Blackbaud here:
If you have any questions or concerns, please call our office at (410) 414-3400 or email gbowen@acltweb.org 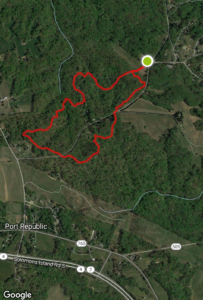 The Laurel Loop is 1.07 miles in total length and is moderately challenging, with at least one very steep incline. And of course, what goes up must come down, and the low-lying areas tend to be muddy. For a slightly longer hike, you can take the connection to Karen’s Trail off the Laurel Loop, where you’ll see more Mountain Laurels. This trail is 0.6 miles and named for former Executive Director Karen Edgecombe. At the end of Karen’s Trail, you can back-track to the Laurel Loop or you can cross Scientists Cliffs Road to pick up the East Loop, which includes a “shortcut” back to another entrance to the Laurel Loop. Total distance of the extended hike is 2.15 miles from the parking lot.

Don’t worry if your planned route didn’t include the Laurel Loop – there are Mountain Laurels scattered on several other trails (North-South and Flint are a couple), but the most concentrated growth is definitely the Laurel Loop.

Whenever you visit ACLT’s trails, your outing will be much more pleasant if you are prepared for and aware of these hiking hazards.