This web page is about the history of the barn; here's a link to a page about the barn preservation project.

Signs at the Holly Hill log barn feature an abbreviated version of this story:

Holly Hill was owned by the Dare family for most of the 19th century and the log barn was probably built in the 1840s or 1850s. The date is suggested by the type of cut nails used. Supporting circumstantial evidence comes from the history of the Dare family. After a debt default in the 1820s, ownership bounced around for a period, with the property coming to Richard S. Dare in 1838, who might then have invested in buildings and other improvements.

The log barn has served multiple functions over the years, including curing tobacco. The building includes tier poles to hang tobacco sticks. However, the exterior siding (at least as documented in the 21st century) did not include vents which, if present, would have supported the idea of a barn purpose-built for tobacco. Meanwhile, the barn also features a large feed trough for livestock constructed of sawmill dimension lumber, seemingly more recent than the log construction. Overall, we have not found a good way to date the various uses.

Richard Dare died in 1868 and was succeeded by his brother John, who died in 1890. A second barn--larger, frame construction, clearly focused on tobacco--was built next to the log barn, likely during John Dare's years. This barn provided double doors that offered good access for workers hanging tobacco, side vents to admit air to help cure the crop, and included a stripping room where cured tobacco was prepared for market. The frame barn was destroyed in the derecho storm of 2012. 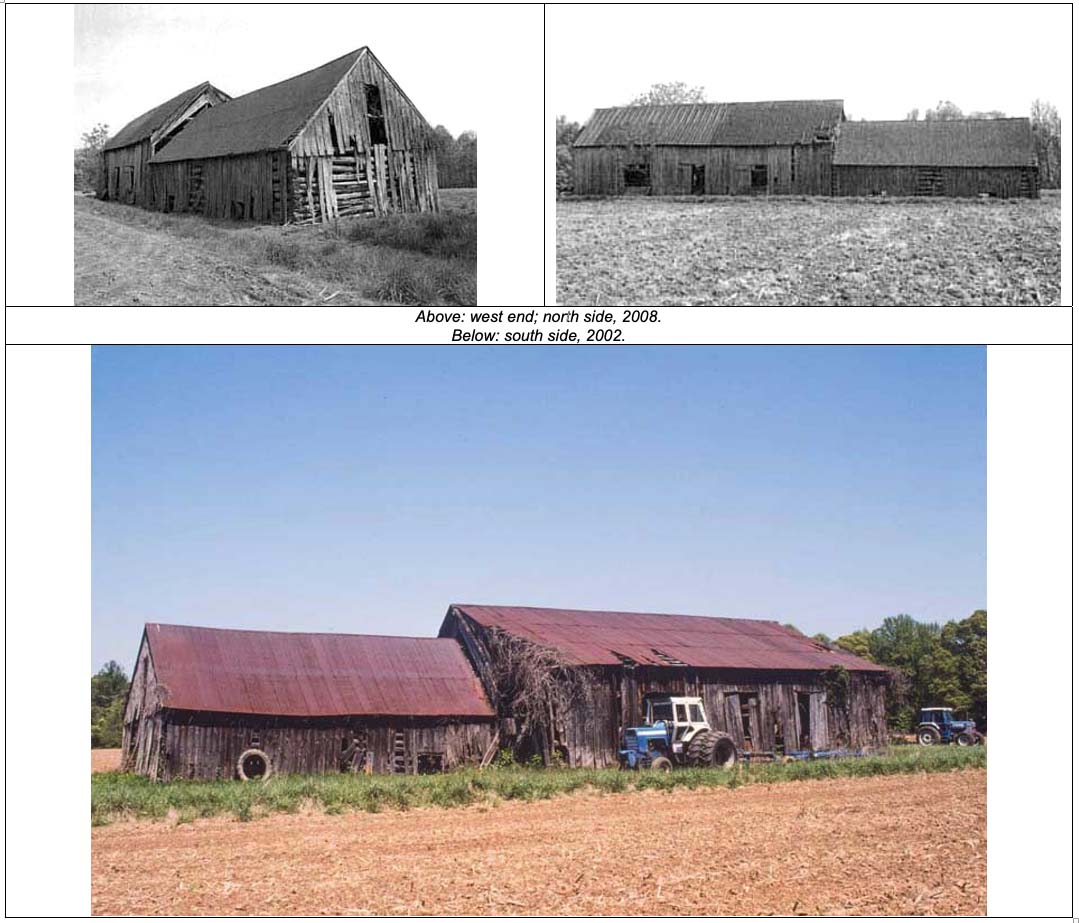 The pair of barns, described "as if one structure," were documented for the Maryland Inventory of Historic Properties in 2002 and 2008-2009. The 2002 documentation was carried out by MHT professionals Marcia Miller and Tom Reinhart. The 2008-2009 documentation was created by a team from the Center for Historic Architecture and Design at the University of Delaware, led by Rebecca Sheppard.

A detailed description is included in the Maryland Historical Trust record CT-1346, titled the Holly Hill Tobacco Barn. The investigation in 2008-2009 included the preparation of measured drawings for the Historic American Buildings Survey (HABS), delineated by Christine Melvin and Scott Federer and now in the collections of the Library of Congress.

Below: measured drawings of the Holly Hill barn from the Historic American Buildings Survey (HABS), 2009. Online at the Library of Congress. The two log pens are delineated on the right side of the plan view (first of the pair below). 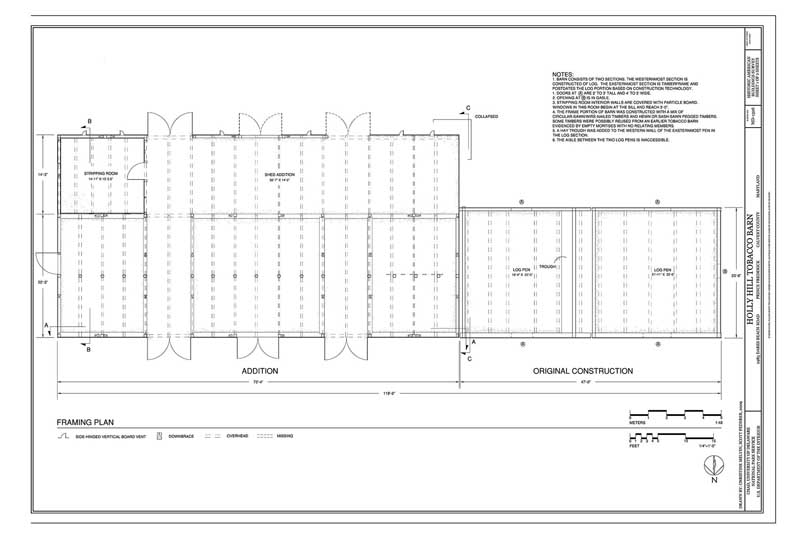 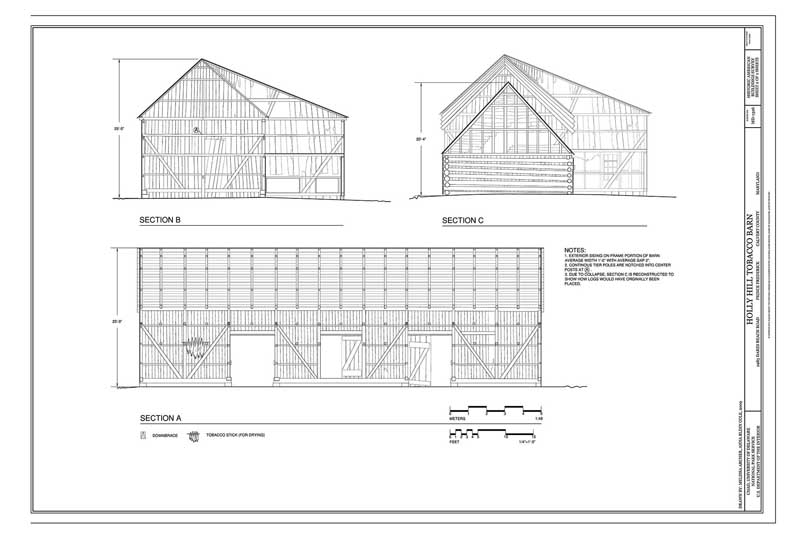 In the course of the ACLT-sponsored barn preservation project (2017-2021), additional information has emerged. The description on this web page combines the findings from the Maryland Historical Trust, University of Delaware, and ACLT documentation.

As noted above, we believe that the log barn was built in the 1840s or 1850s, during the long period when Holly Hill was owned by the Dare family. During the ACLT preservation project we found an extensive number of cut nails in the old construction. Although cut nails were manufactured in the U.S. from about 1790 to 1890, Dennis Pogue, a retired professor in the Historic Preservation Program at the University of Maryland, visited in March 2021 and said that he was confident that many Holly Hill nails fell into a subcategory often called face-pinched cut nails, a type that flourished in the period from about 1835-1890. 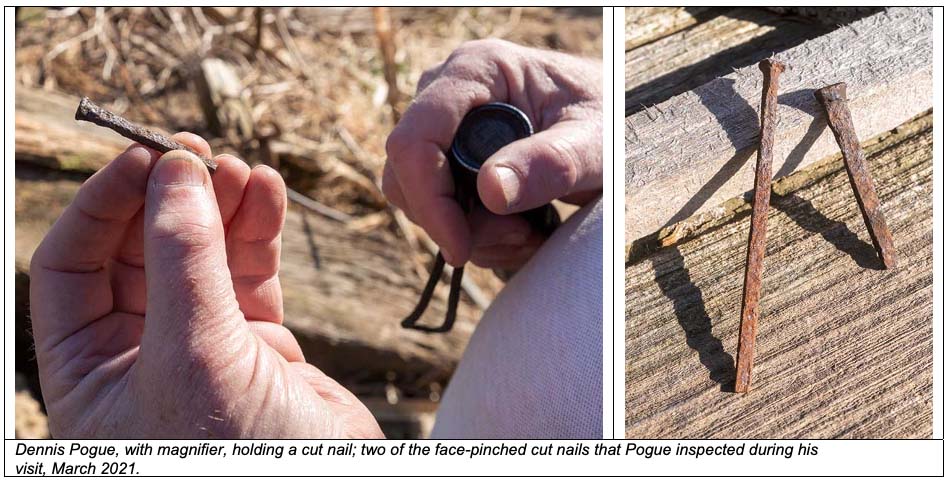 Meanwhile, the MHT report states that the frame barn "likely dates from the second quarter of the nineteenth century." However, the HABS measured drawing reports the widespread presence of wire nails in the frame barn, suggesting construction after the Civil War.

The MHT report states: "The log barn consists of two pens under one continuous roof, each roughly 20 by 23 feet. Logs are notched on their ends and stacked one on top of the other off the ground with no sill. While the logs were left in the round and unchinked so that air might pass through gaps, the joists, plate and collars are hewn. . . . A continuous plate runs the entire length of the double-pen barn." The two pens are at right in the HABS plan drawing, above, and shown in the section Counting the logs, below.

What kind of wood is this? The ACLT project team consulted multiple historic preservation specialists and, although there has not been a definitive lab test, all stated their certainty that the logs are American chestnut (Castanea dentata). The two logs that serve as plates, resting on top of the pens and, when the building was constructed, supporting the rafters and roof, have also been identified as chestnut. The plates are about 48 feet long. 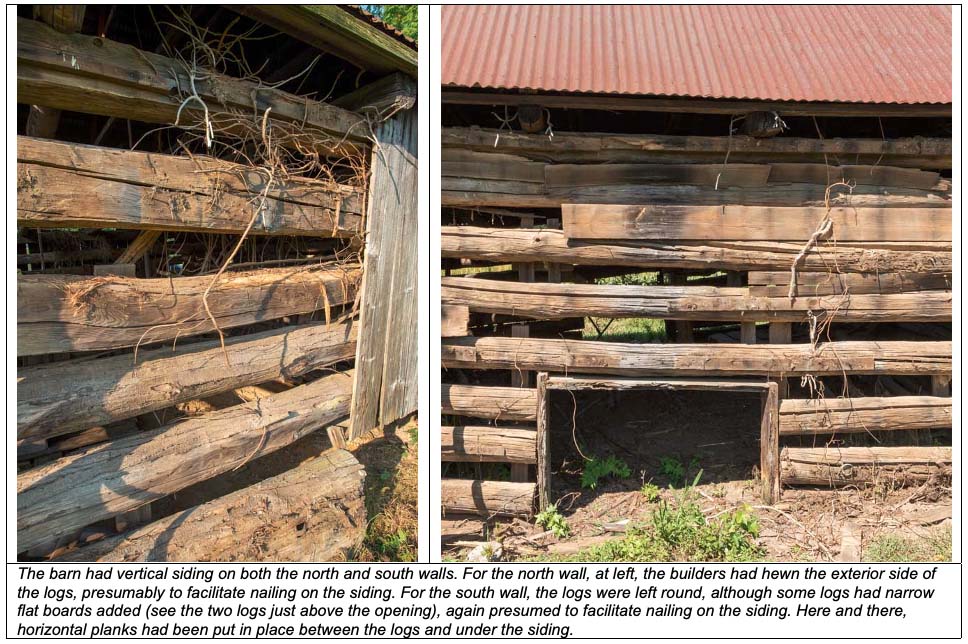 The MHT report states: "The barn is also unusual in its lack of human-sized doors. Small openings, measuring two to three feet tall and four to five feet wide, are centered on both the north and south walls of each pen." These openings might have served sheep or hogs (there is a feed trough in one pen), although the height is impractical for humans (or for cattle, mules, or horses). It would also have been very awkward to hand in sticks of tobacco through the low openings.

In 2018, ACLT volunteers Jeff Klapper and Carl Fleischhauer made an effort to use the HABS drawings as a starting point to count the logs. The images below have been selected from Jeff and Carl's investigation. In addition to developing additional information about the pens, the effort entailed the establishment of identifier codes for the logs, e.g., EPE7 was the "seventh log up" on the east wall of the east pen. Jeff produced a set of metal tags carrying the identifiers and attached them to the logs. If it had been necessary to disassemble the pens (it was not), the tags would support returning the right log to the right place.

As this analysis proceeded, Jeff applied Bora-Care wood treatment to kill and prevents termites, carpenter ants, wood boring beetles and decay fungi. Meanwhile, we had been told by a specialist in the field that these logs were aged to point where little or no potential nourishment for termites remained.

The MHT report states: "Tier poles [to support hanging tobacco] consist of small round saplings supported at either end by H-shaped braces nailed to the logs."

The MHT report states: "Unlike other surviving double-pen log tobacco barns . . . this log barn was constructed with a very narrow impassable aisle between the two pens." Indeed, the more typical pattern would separate the two pens (under a single roof) so that farm work could be carried out in the open area between the pens, with doors offering access into each pen. This more typical type of two-crib design is akin to the double-pen vernacular houses found in the South, often dubbed dogtrot houses. The wide, open dogtrot allows breezes to flow through a building in a hot climate. 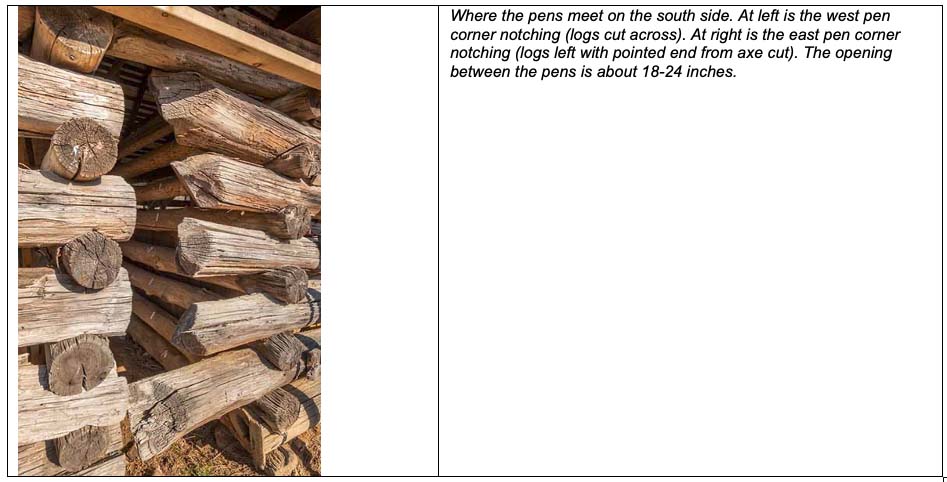 The MHT report alludes to the feed trough when speculating about the small openings: "Although these small openings are the only ground-level entry into the barn, they may have been added when the barn was converted to house animals evidenced by a hay trough added to the western wall of the easternmost pen." Although the construction details of the feed trough hint at a later date than the construction of the log barn as a whole, it remains difficult to know if housing livestock or hanging tobacco came first. 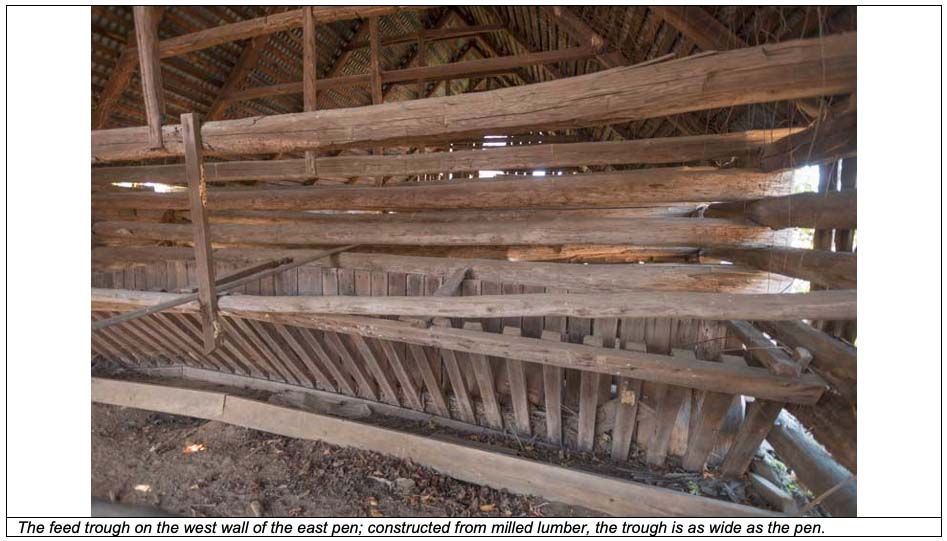 The MHT report states: "The roof is covered with corrugated metal and rafters are on four foot centers and rest on a flat false plate. Each rafter is supported by three collars half-lapped and nailed into each rafter." The ACLT team also notes that the type and spacing of the purlins in the roof suggest that the barn may have been fitted with split shingles when built, replaced by corrugated metal at a later date. 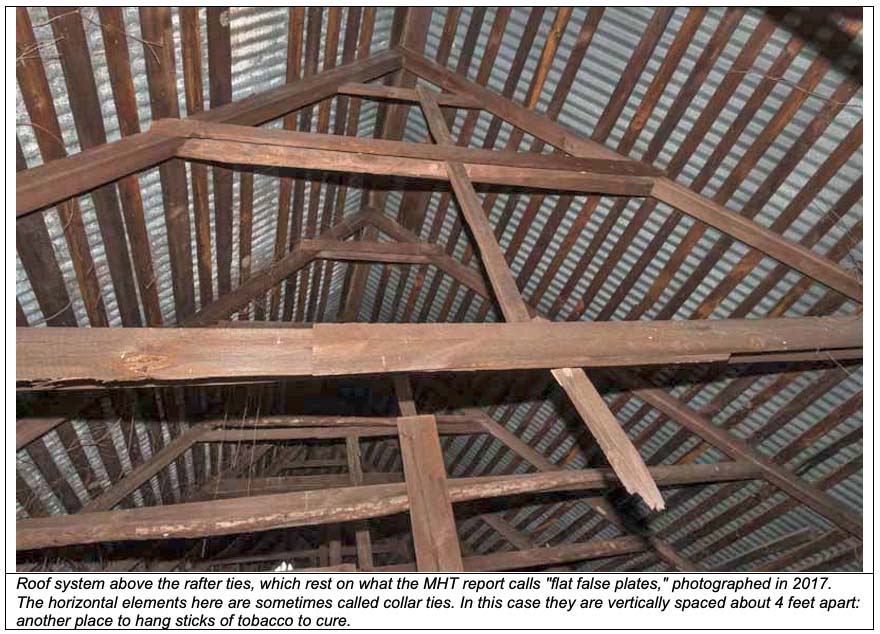 The MHT report does not highlight one important historic feature: hand-riven siding in the east gable end. The siding on the east end was protected by the frame barn, positioned against the log barn's east end. It is possible that similar hand-riven siding was used in the west gable, where it would have been exposed to the weather. 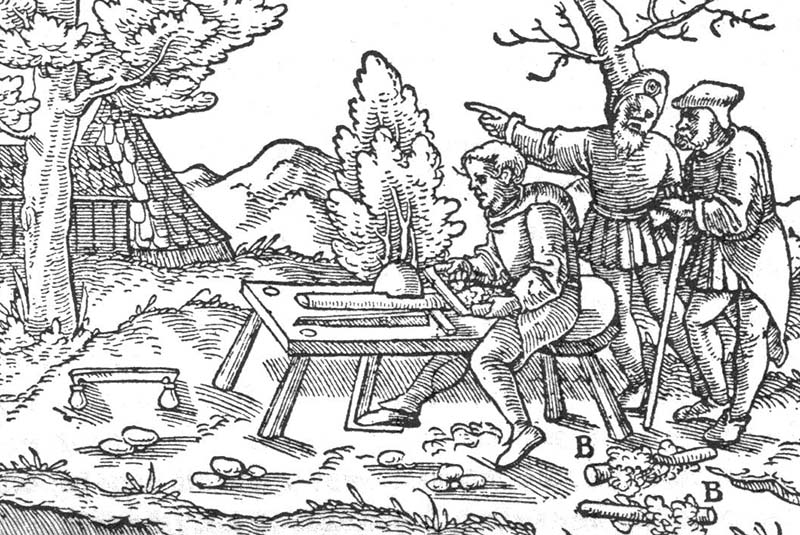 What's hand-riven siding? Strips of wood were riven by a person sitting on a shaving horse and using a draw knife. The practice is of long standing: the illustration above is a detail from Georgius Agricola's 1556 book De re Metallica, based on the author's study of mining in then-Bohemia, now the Czech Republic. (Source: Fire-setting.jpg). 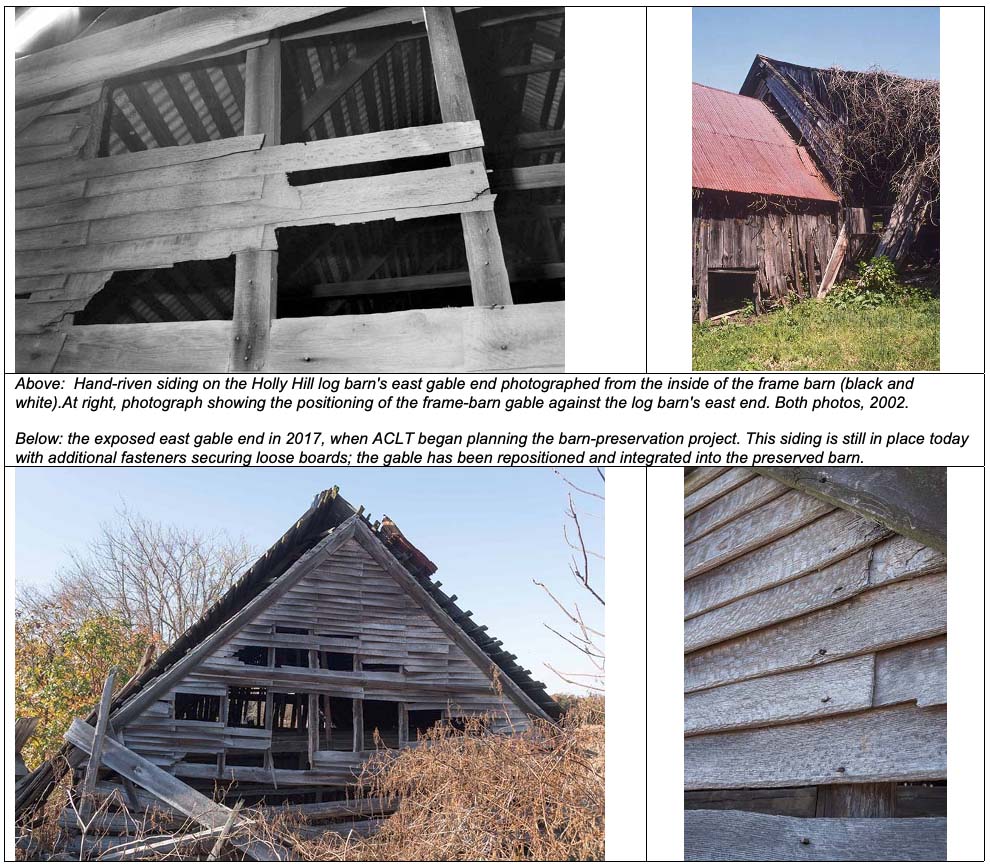 Indigenous People in the Vicinity of Parkers Creek