This web page is about the preservation project; here's a link to a page about the history of the barn

Signs at the Holly Hill log barn feature an abbreviated version of this story:

The ACLT began planning the preservation of the log barn in 2017. During the planning period, ACLT consulted with number of specialists and individuals experienced with historic vernacular buildings, including John O'Rourke, Tom Reinhart, Conrad Marsh, Kirsti Uunila, and others.

In order to guide the discussion of a preservation options, the ACLT project leaders articulated the following high level goals:

The preservation project included three phases. Phase 1 was carried out in the summer of 2018 by volunteers led by Conrad Marsh. Siding was removed, stone footers repositioned, log walls were straightened and buttressed by concrete blocks and temporary framing support, and--most challenging--correction of the tilt of the east gable and reattachment of the gable to the main structure. Work proceeded in the face of 90-degree temperatures. 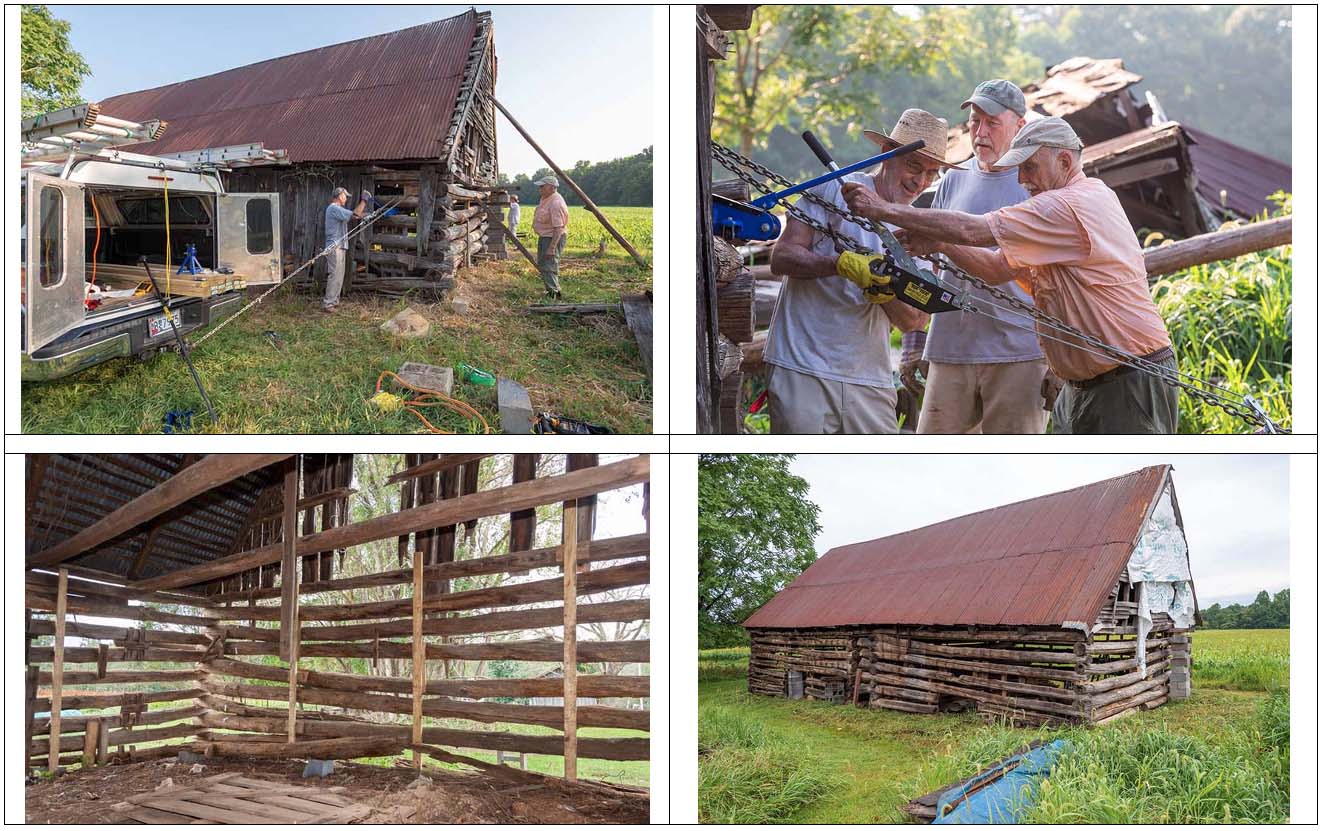 Phase 2 was carried out in 2020-2021 by the contractor Jeff Thompson of Colonial Woodwrights. New construction included protective extensions for the gable ends and a new interior framing system to support the historic log walls and the roof. Concrete footers underpinned the new construction.

Left: Oyster shells found under one of the ironstone rocks used as a pillar (footer) under the bottom log (there was no sill in a formal sense), October 2020. Center: Thompson and Patrick Doering screen the soil to capture artifacts of possible interest as they dig openings for new concrete footers that will support the new interior framing, September 2020. Right: Fragment of a glass vessel found when digging one of the footer holes; approximately 3 or 4 inches longest dimension.

Delivery of concrete, poured into forms for the east end gable extension framing. Left: driver Bruce Yokely; managing the flow, Patrick Doering, Jeff Thompson, and Alan Brand. Center: upper section of the J-bolt above the concrete, to bolt down the new sill for the gable extensions. The lower part of the J-bolt is fastened to rebar in the concrete. Right: Alan Brand directs the pour at the west end.

Thompson commented "historic buildings are not square" as his team carried out extensive custom fitting for each segment of the framing, especially the interior X-braces.

Left: Patrick Doering holds a framing segment in place as Alan Brand uses a maul to move a brace into position. Right: panoramic view of the X-braced interior framing in the east pen. This new framing became the bearing wall for the barn, removing the load from the now-deteriorated log pens.

The gable extensions constructed during phase 2 protect the ends of the barn and also afford visitors with an opportunity to look at elements in the historic barn. At both ends, under the extension, logs were left open, i.e., segments of siding were omitted, leaving some of the logs exposed to view and creating gaps that permit visitors to look into the pens. At the west end, a raised platform allows visitors to look into the log pen and see the structure of the roof. At the east end, the hand-riven siding is exposed to view while still being protected from the weather.

Following historic preservation best practices, the replacement metal roof panels have a new “look” that will not be mistaken for the older corrugated metal.

Left and center: the hand-riven siding in the east gable, before and after the preservation project, protected by the new extension. Right: Jeff Thompson and Alan Brand maneuver concrete blocks into place in the northwest corner to fill a gap where deteriorated logs could not be retained.

In the project's final phase, logs were protected by siding, a fresh version of the vertical siding removed at project start. In this case, however, Thompson prepared added wall framing so the new siding would stand off from the logs to minimize moisture damage. This framing also included horizontal boards linked to the interior structure; these add support to the logs.

Left: Exterior framing to support the new siding. After being nailed in place, the siding will stand off from the logs, thereby reducing the retention of moisture and the risk of rot. Center: ACLT volunteer Scott Hite nails on siding. Right: Finished north side of the barn; ACLT volunteers Scott Hite, Mark Lee, Garrett Lee, Penny Moran, Carl Fleischhauer, and Steve Cloak, July 2020.

Indigenous People in the Vicinity of Parkers Creek