Around the marshes and woods at ACLT, there are several game cameras routinely monitored by volunteers. These provide a snapshot into the behaviors and habits of wildlife in the area. Regulars seen include raccoons, foxes, and great blue herons, but this time something a little different was spotted on camera. One of our volunteers, Ian Messent, recently captured a video of a bat catching insects just above the water in the Horse Swamp Creek. You can watch this nighttime video below:

At this time of year and especially in the summer, bats are a common sight just about everywhere in the state. On most nights at dusk, they will leave their roost and take flight in search of insects.  However, during the winter months, bats go into hibernation. They are only seen during this time if it is exceptionally warm, although this is rare. In those cases, the bats you are most likely to see are known as Big Brown bats, the only species in Maryland able to survive exposure to sub-freezing temperatures.

There are actually 10 species of bats in Maryland and they are divided into two groups based on their preference of shelter.

All of these bats belong to the order Chiroptera, a name meaning “hand-wing”. The bones in the wings of bats are evolutionarily comparable to the bones in our own hands, with a layer of webbed skin that allows them to generate lift and glide through the air.

Despite their spooky reputation, bats are highly beneficial to both humans and other species in their natural communities. Bats can consume up to one third of their body weight in insects in only half an hour and provide an estimated 3 billion dollars in pest control services for the US agricultural industry. As an added note, I’m sure we can all appreciate a few less mosquitoes flying around.

Unfortunately, all of Maryland’s bat species are listed as Species of Greatest Conservation Need in the state. Their decline in numbers is largely due to the spread of White-Nose Syndrome (WNS), a disease affecting cave bats first discovered in Maryland in 2010. You can read more about WNS on Maryland DNR’s resource website here: https://dnr.maryland.gov/wildlife/Pages/plants_wildlife/bats/nhpbatdisease.aspx

Maryland’s bats have also been impacted by habitat loss, as have bats in many other states across the country. They are protected under state and federal law, but unfortunately many bats are still killed when they venture into people’s homes looking for shelter. The Maryland Wildlife and Heritage Service offers safe wildlife control options and DNR’s Nuisance Wildlife Hotline (1-877-463-6497) can be consulted for questions about bat exclusion.

At ACLT, one of our Master Naturalists installed two bat houses in the Parkers Creek Preserve, one at Warriors Rest and another on the Goldstein Bay farm property. Although no bats have been spotted using the boxes yet, they are available for our little winged friends if needed. You can see what these boxes look like in the photos below.

Much of the information in this article has been shared from Maryland DNR’s wildlife pages and the University of Maryland Extension Home and Garden Information Center. Check out these great resources to learn even more about bats in our state. As always, thank you to all of ACLT’s members and supporters for your help in preserving wildlife habitat in Calvert County.

This is a follow-up to an earlier blog post. Read it here.

During this exciting spring nesting season, ACLT’s wood duck family has been growing steadily. The numbers are in with a total of 53 eggs laid and 52 hatched from four boxes in Horse Swamp and Parkers Creek. This near-perfect hatch rate is a great sign for the local wood duck population.

Earlier in the season, one of these eggs was found abandoned in a nest and was transferred to an active nest. Before it was transferred to the new nest, the egg was marked with a sharpie so that its development could be tracked. We’re happy to say that this little duckling survived and fledged with others from the new nest. The one egg that did not hatch is available to touch and hold along with other natural artifacts on the porch of Jeff’s Barn near the north side trailhead.

More great news is that all 52 of the hatchlings successfully fledged and are now enjoying their new home in the wetland habitats in Horse Swamp and Parkers Creek. One of our volunteers, Bob Field, had the unique opportunity to watch as ducklings made their first leap from the nest.

When wood ducklings are ready and it is time to fledge, the mother hen calls out from just below the nesting box (don’t worry, wood duck nests are typically over standing water or marshy substrate). Upon hearing this, the ducklings emerge one by one and jump down in quick succession. Not only is this the ducklings’ first experience of the world outside of their nest, but they also have their first taste of flight while they try their wings. With most nests located between 6 to 10 feet above the water or marsh and some nests located in tree cavities or woodpecker holes reaching closer to 30 feet, fledging for wood ducks is no small feat. You can see this leap of faith in the Smithsonian YouTube video below. If the video doesn’t work, click here to view on Youtube.

After each of the ducklings has vacated the nest, all of the contents of the nesting boxes, including feathers, nesting material, and shells, are removed and sorted. Volunteers examine what remains in the nest to gain an accurate count of how many ducklings hatched and fledged. This is done away from the original site to keep the nesting boxes safe from predators, which can follow the scent of discarded contents. The photo to the right shows the empty shell casings left behind after hatching. Sometimes, the shells can fragment resulting in “caps”, such as the two in the top of the photo. Volunteers have to be careful not to count separate “cap” fragments as an additional hatch. In this particular box, there were 15 ducklings that hatched. 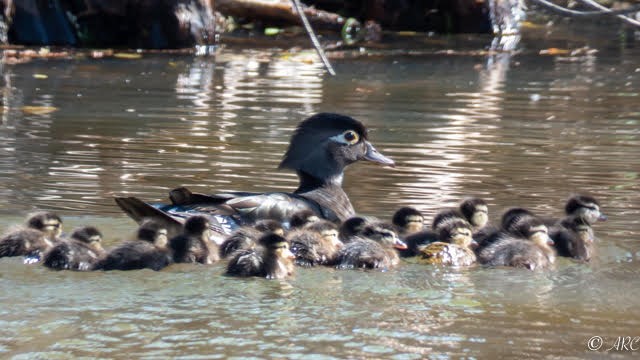 Spring started early this year for wood ducks in the Parkers Creek watershed, with the first egg laid on February 23rd. According to local wood duck box monitors, affectionately known as “duckers”, this is the first egg of the season recorded in the county. For years, ACLT has participated in the Maryland Wood Duck Box Initiative with the Calvert County Natural Resources Division and private citizens to install and check wood duck nesting boxes in order to provide habitat and monitor populations around Calvert’s waterways. The program relies on dedicated volunteers who regularly make observations and collect data, such as number of eggs laid and hatchling success, from over 50 nest boxes at seven sites.

One of ACLT’s wood duck box project coordinators, Bob Field, reports that there are currently hens sitting on eggs in four of our 15 nest boxes, including one on Parkers Creek. This is exciting news for everyone involved with the project. Last season was the first time any of the boxes located on Parkers Creek were used, so seeing one of these hens return to nest there is a good sign.

The clutch sizes for ACLT’s nesting boxes currently range from 10-13 eggs, which is average for wood ducks whose clutches usually range anywhere in size from 6 to 16 eggs. Nesting boxes located in the Horse Swamp have historically been the most productive at ACLT, with some boxes having two clutches by different hens. Last year ACLT saw a 100% hatch rate for 37 eggs, which is the highest among recorded sites in the county. Although nesting boxes at ACLT tend to be underutilized, occupied boxes have been generally very successful with high hatch rates season after season.

This year has gotten off to a great start for both the wood ducks and all of us who appreciate them at ACLT. Thanks to our membership and volunteers, we provide habitat and monitoring for wood ducks in the Parkers Creek watershed. Stay tuned for more updates on ACLT’s wood ducks and our part in the Maryland Wood Duck Box Initiative.

The short answer is no. We’re not. Many of us are old enough to remember the first Earth Day on April 22, 1970 but many were not yet born or only remember doing simple things like trash pickups or arts and crafts to mark the one day a year. Many are not aware of its history and the significant changes it brought about.

“On April 22, 1970, 20 million Americans — at the time, 10% of the total population of the United States — took to the streets, parks and auditoriums to demonstrate for a healthy, sustainable environment in massive coast-to-coast rallies. Thousands of colleges and universities organized protests against the deterioration of the environment.” –earthday.org

Despite the fact that the first Earth Day resulted in the establishment of the Environmental Protection Agency and the passage of the Clean Air, Clean Water, and Endangered Species Acts, celebrating the Earth one day a year is not enough and never has been. To have a real impact, we as individuals need to make permanent lifestyle changes every single day of the year to live more sustainably. And to have a real impact, we need to start making those changes now.

Climate Change, Deforestation, Water Quality and Scarcity, Waste Disposal, Pollution, and on and on and on. The environmental challenges we’re facing now can be overwhelming. It’s very tempting to believe there is nothing we can do about it as individuals.  But we must. If enough of us commit to living more sustainably, we can and will make a difference. We must.

Today marks 50 days until the 50th Anniversary of Earth Day. We here at ACLT we love doing experiments and taking on challenges. In fact, one of the strategies of ACLT’s 5-Year Plan (2019-2023) is to “lead by example in environmental stewardship whenever possible.”

So let’s try this … every day for the next 50 days, check out our daily posts about how you can live a more sustainable lifestyle and start making those small changes. When we finally get to Earth Day on April 22nd, let’s see how many of us have made substantial changes in the way we think, shop, eat, and live.